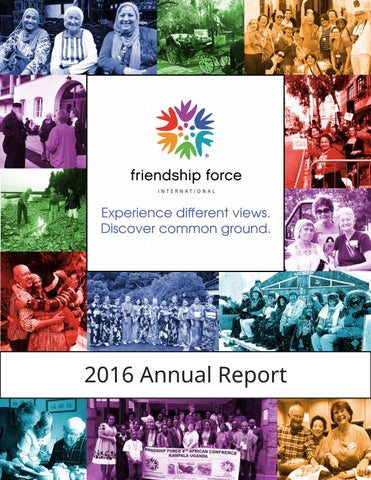 Letter from Jeremi Longtime Friendship Force members have probably heard every quip, quote, and anecdote related to the immense value one gains by expanding their worldview and understanding of other cultures. Many people motivated by these types of expressions work toward the admirable and worthwhile goal of traveling abroad by any means. But these expressions can only take you as far as someone’s front door. The difference between a standard traveler and a Friendship Force member is that our members walk through that door and find new friends waiting. Earlier this year, Friendship Force International debuted a new tagline that fits the unique opportunity our organization provides to people around the world.

For many, Experience Different Views. Discover Common Ground has become more of a call to action rather than just a tagline. In our quest to continue to evolve as global citizens, we know we must go beyond the threshold of one’s front door and into the spaces where people live day-to-day - where the nuances in their lives are most evident. That space is where they prepare their meals, talk with family and friends, share their art or their music. In other words, it is the place where lasting connections are made. But the world is changing, and with it, the boundaries of cultural tolerances. While our mission remains incredibly relevant throughout these changes, Friendship Force International is not immune to the demands imposed by rapidly evolving technology, global business development, and major world events. Each shift requires our organization to embrace new ways of continuing to offer this simple concept of peace through friendship, and indeed, we are. In 2016, Friendship Force International Board and staff endorsed a plan that aims to give more groups of people the experience of gaining cultural understanding through shared experiences. The plan also incorporates a multinational, multicultural and multilingual approach to supporting our clubs throughout our existing 350+ communities, while also developing new clubs around the world. As we continue to make headway in building the future of Friendship Force, we are already beginning to see a renewed sense of optimism and energy in our clubs, as well as sparks of interest to join the Friendship Force movement. This is an exciting time to be part of such an extraordinary organization! For everyone who embraced Friendship Force International’s mission as an ambassador, host, club leader, dedicated club member, or financial donor in 2016 - thank you! If you haven’t taken part yet, what are you waiting for? There is a world of friends that this organization would be honored to introduce to you. Best regards / Met vriendelijke groeten / Cordialement / Mit freundlichen Grüßen / Szívélyes üdvözlettel / Distinti saluti / Załączam pozdrowienia / Cordialmente / Ystävällisin terveisin / Med vänliga hälsningar / Le dùrachdan / Cofion cynnes / Suyo atentamente /

2016 Journeys By The Numbers

INCLUDING THE WORLD CONFERENCE AND CRUISE

Friendship Force International’s first World Conference in Africa was held September 16 - 19, 2016. This delegation was a smaller but very enthusiastic group of 173 delegates representing 17 countries. The plenaries rated exceptionally well, in particular: (a) the presentation from a Moroccan non-profit Project Soar, (www.projectsoarmarrakesh.org), whose mission is to educate and empower local girls, (b) the presentations from African clubs talking about activities in their communities, (c) the closing and opening remarks by Jeremi Snook and Debbie Powell, and (d) a hilarious invitation to Manchester from Club President Andrew Kelly. In the evaluations, 98% rated the conference as good or excellent. Delegates said they most enjoyed meeting old and new friends, the Moroccan people and culture, and the intimate nature of a smaller conference. The most popular and well-rated workshop was “Best Practices: Club Recruitment and Retention,” rated good-to-excellent by every single participant. A new format was introduced - “unconferencing” - where delegates chose from a variety of topics about which they themselves wanted to learn about or share. The interactive format was well-received, and we received lots of suggestions about how to improve on the idea if we run it again at the next conference, the 40th Anniversary World Conference in Manchester, U.K. in August 2017.

The 2016 winners of the club and individual awards were: Innovative Programming:

Why is Friendship Force Important? “Especially in times of growing nationalism and global distrust, meeting different people and experiencing cultures is of foremost relevance. Through the homestay experiences provided by the Friendship Force, I have learned about other cultures and they have learned about mine. Now more than ever, FFI’s mission promotes what the world is in urgent need: tolerance, understanding, and respect.”

“Friendship Force homestays open up more opportunities for interaction with other cultures around the globe that promote more friendship, peace, unity, and trust. This allows different people to coexist and learn about each other, making us a strong, unified, and peaceful global family.”

“In our world where people are becoming more isolated, skeptical, discriminatory, and prejudiced, but at the same time desperately seeking peace, connection and love more than ever, the mission of the Friendship Force is the one and only solution. Friendship Force brings the borders down, overcomes the prejudices, drowns the suspicions, yet unites all the cultures, colours and beliefs in its big warm heart. We have a long way to go - but it is one friend at a time.”

Open World Leadership Center is a legislative branch agency that conducts exchanges to establish lasting professional relationships between emerging leaders and their U.S. counterparts in democratic institutions. Delegates are provided with extensive exposure to American politics and civic life while being hosted by American families. Friendship Force’s work with Open World Leadership Center has been a key part of its U.S.-Eurasia programs since the founding of Open World by the U.S. Congress in 1999. Since then, Friendship Force clubs across the United States have hosted thousands of delegates. In 2016, U.S. Friendship Force clubs hosted 111 delegates and facilitators from the countries of Georgia, Kenya, Liberia, Russia, Serbia, Tajikistan, Timor-Leste, Turkmenistan, and Ukraine. Topics covered for the Eurasian delegations included: Accountable Governance, Education and Innovation, Healthcare, Legislative Development, and Media Practices. Each delegation reported unique stories of meaningful professional connections and crosscultural experiences during their programs. The Open World program continues to be very popular with Friendship Force clubs, and many clubs have expressed their interest to host OWLC delegations in the future. Due to the significant work completed in conjunction with Open World Leadership Center, Friendship Force International received their Annual Grantee of Merit Award in January 2017. The Annual Grantee of Merit Award is presented to organizations who have demonstrated outstanding service to Open World Leadership Center. Two Friendship Force staff members, Director of Operations Matthew Nidek and Financial Controller Tracy Harrell traveled to Washington, D.C. to accept the award.

• Club-to-Club Journeys continue to be the heart and soul of Friendship Force, making up more than half of all revenues that come in to support global operations. • Global Journeys remain popular among clubs in 2016. • Although only comprising 7% of overall revenues, Friendship Force clubs across the United States opened their homes to 111 participants on 18 incoming cultural Journeys from Georgia, Kenya, Liberia, Russia, Serbia, Tajikistan, Timor-Leste, Turkmenistan, and Ukraine through the Open World Leadership Program. •

• Friendship Force International is supported by an everexpanding group of volunteer and staff leaders around the world. • Our organization continues to run incredibly lean and efficient for organizations of our size and complexity.

Friendship Force has Regional Support Managers headquartered in the United States, as well as Germany, Brazil, and Japan!

Friendship Force now has staff located around the world to better serve our clubs!

Get to know your Friendship Force staff under the “Who We Are - Staff” section of our website!

During their October 2016 meeting, the FFI Board of Directors voted that the Legacy Fund be renamed the Annual Fund to reflect the use of funds received annually in support of our mission. The purpose of the fund will not change – it is a change in name only. When you give to the FFI Annual Fund, 100% of your donation will still go to support programs that encourage worldwide friendship.

Along with the change in name to the Annual Fund, the Board also voted to create the Wayne Smith Legacy Circle for the purpose of establishing a planned giving program. Planned giving involves integrating a donor’s charitable gift into his or her overall financial, tax, and estate planning objectives so as to maximize benefits to both the donor and Friendship Force International. The most common form of planned giving is leaving a bequest in your will to FFI. This new program is being established to honor Wayne Smith’s lasting legacy as FFI’s founder, and to bring together donors who choose to leave their own legacy at FFI through philanthropy.

Donate to Friendship Force at https://friendshipforce.org/donate

Why I Give... “Being with FF for more than 16 years now, I have made many good friends. Because of FFI, my life is filled with great memories and I am very grateful for being a part of this organization.” -Sumiko Numa, FF Saitama, Japan “My husband, Ted, and I joined the FF of Oregon’s Mid-Willamette Valley the first year the club hosted - 1993. A friend of mine was co-Exchange Director (Journey Coordinator) at the time. Being in high school and college in the ‘60s, Ted and I were both very interested in this organization that promotes peace through friendship. What an awesome way to connect with people in or from other countries! We truly believe that having relationships with citizens from around the world makes our globe more peaceful. We wanted to support that mission then. And, we know it is even more important today! We would much rather see our contributions going to generating understanding than for ‘protection.’ Anyone who believes in using a positive method to accomplish good will want to donate towards the cause. Go Friendship Force International!” - Rita Powell, FF Oregon’s Mid-Willamette Valley, USA

Wayne Smith Medal nominations may be submitted through the Friendship Force website. www.friendshipforce.org

(P) indicates a Partnership, rather than a Friendship Force club.

12741 Bujumbura and All Africa to Southwest Florida and Orlando, USA 12878 Ota-Gunma, Japan to Hsinchu, Taiwan

2016 Friendship Force Board of Directors

Director of Marketing and Communications

RSM - Latin America and IT Manager

RSM - Asia and the South Pacific

Get Involved with FFI www.friendshipforce.org

Find a club near you, or join our emailing list to be notified of Friendship Force Journey opportunities you can participate in as a non-member. You can also contact us to learn about starting your own club!

When you give to Friendship Force International, 100% of every dollar is used to support youth, individuals and families in programs created to encourage worldwide friendship.

Planned giving involves integrating a donorâ&amp;#x20AC;&amp;#x2122;s charitable gift into his or her overall financial, tax, and estate planning objectives so as to maximize benefits to both the donor and Friendship Force International.

Go On a Journey

Travel the world. Be welcomed into someoneâ&amp;#x20AC;&amp;#x2122;s home and immerse yourself in their local culture. Make new friends as you cross the barriers that separate us.

One of the best ways to promote global understanding across the barriers that separate people is to host an ambassador in your home. Show them your community, city, country and culture, and learn about theirs over meals, laughter, and shared experiences.