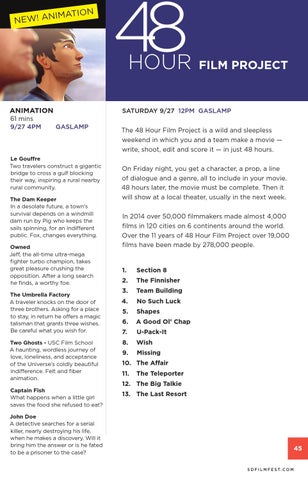 Le Gouffre Two travelers construct a gigantic bridge to cross a gulf blocking their way, inspiring a rural nearby rural community. The Dam Keeper In a desolate future, a town’s survival depends on a windmill dam run by Pig who keeps the sails spinning, for an indifferent public. Fox, changes everything. Owned Jeff, the all-time ultra-mega fighter turbo champion, takes great pleasure crushing the opposition. After a long search he finds, a worthy foe. The Umbrella Factory A traveler knocks on the door of three brothers. Asking for a place to stay, in return he offers a magic talisman that grants three wishes. Be careful what you wish for. Two Ghosts - USC Film School A haunting, wordless journey of love, loneliness, and acceptance of the Universe’s coldly beautiful indifference. Felt and fiber animation. Captain Fish What happens when a little girl saves the food she refused to eat? John Doe A detective searches for a serial killer, nearly destroying his life, when he makes a discovery. Will it bring him the answer or is he fated to be a prisoner to the case?

The 48 Hour Film Project is a wild and sleepless weekend in which you and a team make a movie — write, shoot, edit and score it — in just 48 hours. On Friday night, you get a character, a prop, a line of dialogue and a genre, all to include in your movie. 48 hours later, the movie must be complete. Then it will show at a local theater, usually in the next week. In 2014 over 50,000 filmmakers made almost 4,000 films in 120 cities on 6 continents around the world. Over the 11 years of 48 Hour Film Project over 19,000 films have been made by 278,000 people. 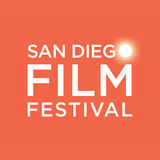 Your guide to the 13th annual San Diego Film Festival featuring over 100 groundbreaking independent and studio films from emerging and veter...

Your guide to the 13th annual San Diego Film Festival featuring over 100 groundbreaking independent and studio films from emerging and veter...