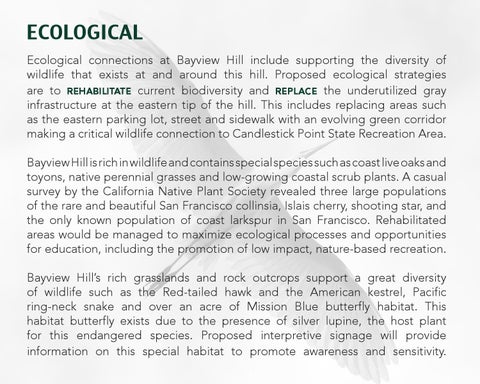 ecological Ecological connections at Bayview Hill include supporting the diversity of wildlife that exists at and around this hill. Proposed ecological strategies are to rehabilitate current biodiversity and replace the underutilized gray infrastructure at the eastern tip of the hill. This includes replacing areas such as the eastern parking lot, street and sidewalk with an evolving green corridor making a critical wildlife connection to Candlestick Point State Recreation Area. Bayview Hill is rich in wildlife and contains special species such as coast live oaks and toyons, native perennial grasses and low-growing coastal scrub plants. A casual survey by the California Native Plant Society revealed three large populations of the rare and beautiful San Francisco collinsia, Islais cherry, shooting star, and the only known population of coast larkspur in San Francisco. Rehabilitated areas would be managed to maximize ecological processes and opportunities for education, including the promotion of low impact, nature-based recreation. Bayview Hillâ&#x20AC;&#x2122;s rich grasslands and rock outcrops support a great diversity of wildlife such as the Red-tailed hawk and the American kestrel, Pacific ring-neck snake and over an acre of Mission Blue butterfly habitat. This habitat butterfly exists due to the presence of silver lupine, the host plant for this endangered species. Proposed interpretive signage will provide information on this special habitat to promote awareness and sensitivity.