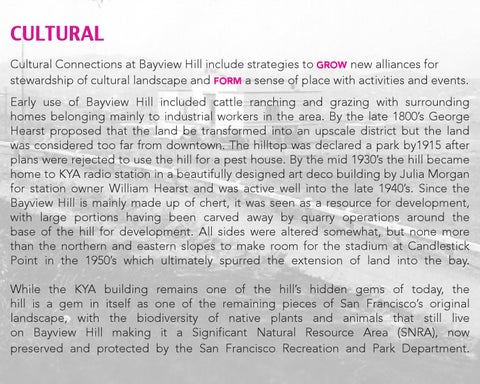 cultural Cultural Connections at Bayview Hill include strategies to grow new alliances for stewardship of cultural landscape and form a sense of place with activities and events. Early use of Bayview Hill included cattle ranching and grazing with surrounding homes belonging mainly to industrial workers in the area. By the late 1800’s George Hearst proposed that the land be transformed into an upscale district but the land was considered too far from downtown. The hilltop was declared a park by1915 after plans were rejected to use the hill for a pest house. By the mid 1930’s the hill became home to KYA radio station in a beautifully designed art deco building by Julia Morgan for station owner William Hearst and was active well into the late 1940’s. Since the Bayview Hill is mainly made up of chert, it was seen as a resource for development, with large portions having been carved away by quarry operations around the base of the hill for development. All sides were altered somewhat, but none more than the northern and eastern slopes to make room for the stadium at Candlestick Point in the 1950’s which ultimately spurred the extension of land into the bay. While the KYA building remains one of the hill’s hidden gems of today, the hill is a gem in itself as one of the remaining pieces of San Francisco’s original landscape, with the biodiversity of native plants and animals that still live on Bayview Hill making it a Significant Natural Resource Area (SNRA), now preserved and protected by the San Francisco Recreation and Park Department.