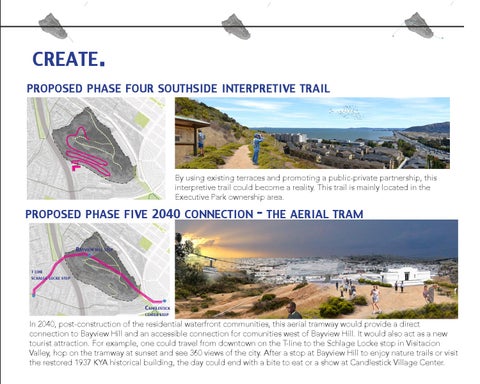 By using existing terraces and promoting a public-private partnership, this interpretive trail could become a reality. This trail is mainly located in the Executive Park ownership area.

In 2040, post-construction of the residential waterfront communities, this aerial tramway would provide a direct connection to Bayview Hill and an accessible connection for comunities west of Bayview Hill. It would also act as a new tourist attraction. For example, one could travel from downtown on the T-line to the Schlage Locke stop in Visitacion Valley, hop on the tramway at sunset and see 360 views of the city. After a stop at Bayview Hill to enjoy nature trails or visit the restored 1937 KYA historical building, the day could end with a bite to eat or a show at Candlestick Village Center.