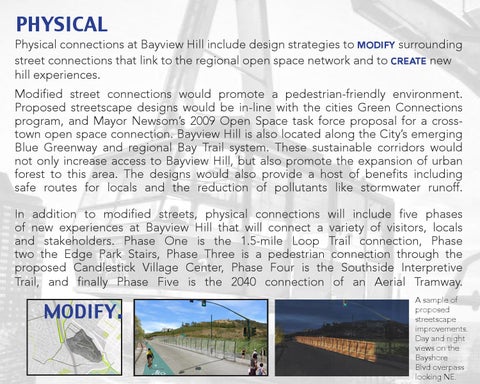 physical Physical connections at Bayview Hill include design strategies to modify surrounding street connections that link to the regional open space network and to create new hill experiences. Modified street connections would promote a pedestrian-friendly environment. Proposed streetscape designs would be in-line with the cities Green Connections program, and Mayor Newsomâ&amp;#x20AC;&amp;#x2122;s 2009 Open Space task force proposal for a crosstown open space connection. Bayview Hill is also located along the Cityâ&amp;#x20AC;&amp;#x2122;s emerging Blue Greenway and regional Bay Trail system. These sustainable corridors would not only increase access to Bayview Hill, but also promote the expansion of urban forest to this area. The designs would also provide a host of benefits including safe routes for locals and the reduction of pollutants like stormwater runoff. In addition to modified streets, physical connections will include five phases of new experiences at Bayview Hill that will connect a variety of visitors, locals and stakeholders. Phase One is the 1.5-mile Loop Trail connection, Phase two the Edge Park Stairs, Phase Three is a pedestrian connection through the proposed Candlestick Village Center, Phase Four is the Southside Interpretive Trail, and finally Phase Five is the 2040 connection of an Aerial Tramway.