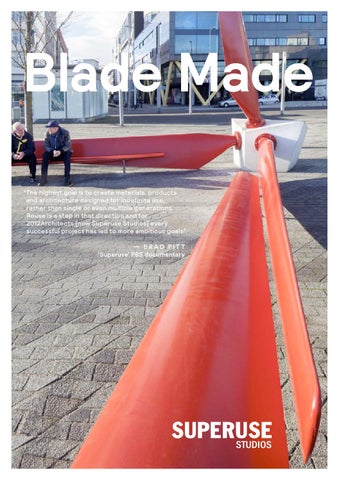 Blade Made “The highest goal is to create materials, products and architecture designed for indefinite use, rather than single or even multiple generations. Reuse is a step in that direction and for 2012Architects [now Superuse Studios] every successful project has led to more ambitious goals” — Brad Pitt ‘Superuse’ PBS documentary

The wind energy industry continues to boom. Each new turbine generating rotor blades made of valuable composite materials that are difficult to recover at the end of their energy generating life. New generation rotor blades made of glass or carbon fibre composite material have average lifespans of between 10 and 25 years. Recycling of glass fibre composite is possible though complex. However, recycling of the more highly valued carbon fibre composite is currently impossible. Because of its value, substantial R&D investment worldwide is being made to develop recovery and recycling methods.

In many EU countries landfill of carbon composites is now prohibited. Thus, though discouraged, many rotor blades at the end of their wind turbine life, are currently shredded and incinerated, or, in countries where it is still allowed, sent to landfill.

At current growth rates, by 2034, there will be ~225,000 tonnes of rotor blade composite material produced annually, worldwide.

The public increasingly demands that green industries have practical and ecologically sound solutions for its production and end-of-life waste issues.

A Superuse solution Architects can play a fundamental role by using waste, and what’s more ingenuity, to convert waste into structures that are useful, imaginative and beautiful. Baha m ó n a n d Sa n j i n é s 2 0 1 0 Rematerial: From Waste to Architecture

We, at Superuse Studios, are waste use pioneers with 17 years experience using waste material such as end-of-life wind rotor blades in design and architecture. From rotor blades we have successfully designed and built: urban furniture, a playground, a sign post for a recycling centre, and, are currently finalising the construction of blade made bus shelters. Our realised projects demonstrate the technical applications and potential for blade made designs and architecture. Blade made designs are durable, iconic, compete economically, and, reduce the ecological footprint of projects in which they are used. We envisage yet larger scale architectural potential for

rotor blades; structures that celebrate the inherent design, engineering, material, aesthetic, ergonomic and iconic properties of rotor blades and that are creative, useful, and beautiful.

such structures when economic and environmentally viable recovery or recycling methods are established. Benefits not achieved when composites are sent to permanent disuse in landfill or are incinerated.

In their second life as design and architectural elements, rotor blades could be used for a further 50-100 years, or more.

The global availability of discarded rotor blades makes them a very interesting resource for blade made projects worldwide.

If blade made design was adopted globally it could play a considerable role in reducing waste generated by the wind energy industry by providing unique design and architecture with added aesthetic and high material value for society. Blade made structures could play an additional valuable role as above-ground, in-use, composite material storage. In this way valuable composite material could be recovered later from

Blades redirected from incineration and landfill.

Public seating made from rotor blades was designed and installed for the Rotterdam municipality with joint funding from Joulz Energy Company. The REwind public seating is located at Willemsplein, a public square at the foot of the well-known Erasmus bridge. The municipality were in need of durable, indestructible seating with iconic quality for people waiting to board harbour tour boats, but which could also be temporarily removed, when necessary, to make room for public events. Nine rotor blades from Friesland destined for incineration were used. 5 blades were used for seating, 3 as backrests, and 1 as place marker. By adjusting the angles and positions of the blades ergonomic public seating with a diversity of seating options was created. Seating depths vary from ±30cm to ±80cm, providing upright seating to more relaxed lounging options.

The ±6m long blades, originally manufactured by Stork, are attached with bolts to 1m3 concrete aggregate blocks made heavy enough to keep the lightweight blades in place. The aggregate is 100% recycled concrete rubble from Rotterdam. The blocks have a pentagon footprint with a skewed 3D form that changes shape from different viewing angles. The tops of the blocks are oblique which puts the upright place marker blade at a slight angle, making it stand out against the predominantly vertical elements on the square. All blades were painted signal red, to bring colour to the stark grey surroundings of Willemsplein and to pick up on the red of Willemsbrug that can be seen further down the river.

The first ‘Wikado’ built at the Meidoorn playground at Oude Noorden, Rotterdam, was built for the same budget as a comparable standard playground, and has an ecological footprint fifty times smaller. This Keurmerk Instituut approved playground is winner of the 2009 European Environmental Design Award. The playground was designed to maximise imaginative play, social interaction, and children driven game development. The inherent properties of rotor blades make this material an excellent choice: weather and wind resistant; organic, ergonomic

shapes; and, a strong and rigid structure. The cylindrical portion of 30m long blades has a diameter of 1.4m and makes for interior play spaces.

children to pump water for mixing with sand; and, the ‘slide tower’ to which the original slippery slides from the site are attached.

One of the five 30m blades was used intact. The remaining four blades were cut into 3 sections.

The intact blade and remaining cut sections were overlaid as if pick-up-sticks in the classic children’s game ‘Mikado’. And indeed, the name ‘Wikado’ is derived from ‘Mikado’, and the Dutch word ‘wiek’ for rotor blades.

The four cylindrical end sections were transformed into play towers that stand around the central play zone. Each tower has a distinct and recognizable character: the ‘towerflat’ has three rooms with peeking holes; the ‘watchtower’ with a former F16 cockpit on top; the ‘water tower’ with hand pump for

The overlaid blades give a diversity of play spaces for toddlers through to older children and allows for different types of play activities. It creates a labyrinth in which children can

endlessly chase each other, whilst also creating sheltered and interior spaces for other kinds of play. Tensioned netting strung between the 4 towers is for climbing and also functions to create a play space for street football (the PannaVeld). The surface of the PannaVeld is made of ‘Nike gravel’, a flooring developed by Nike sports from shredded sneakers.

Construction is underway of the Superuse Studiosâ&#x20AC;&#x2122; designed shelters for the thousands of daily commuters to use the bus-train transfer station at Almere Poort. The Almere municipality is developing the bus-train transfer station at Almere Poort in an effort to stimulate investment and building in the area. The durable and indestructible shelter design uses four 30m rotor blades. Waste rotor blades are easy to find in Almere, Hollandâ&#x20AC;&#x2122;s #1 wind-energy region. Stacked in a Stonehenge like manner two 30m blades are used to create a large shelter. Two of these large shelters are being built. The changing shape over the length of the blades gives a shelter roof that morphs into different shapes depending on the angle from which it is viewed.

Every part of the blade is used. The blades were cut into 4 sections to harness the different inherent qualities along the length of the blade. This gives construction pieces that are essentially readymade for different construction purposes. The strongest and heaviest part (former connection to the wind turbine axial) is used as roof supporting columns, and the widest part of the blade for the roof. The tip of the blade is used for the long seating bench, and the circular end pieces are used for large planting pots placed around the site. Construction is underway and completion is expected by the end of November 2014.

A waste wind rotor blade stands 25m high over the Kringloop Zuid recycling centre. It is visible for kilometers and acts as a signpost directing visitors to the material collection and distribution point. The top 4m tip of the blade now serves as an advertising banner next to the front door. Kringloop Zuid is the large, sheltered recycling center located at the edge of Maastricht. The use of reclaimed materials in its construction reinforces the building’s role as recycling center. A waste rotor blade, reclaimed window frames, and colourful steel sheeting production waste were used. The reclaimed window frames were used to make a distinctive 40m long, 6m high shop front. This shop window is highly visible from the street and brings light into the 2,000m2 interior. The frames were harvested from apartment blocks being demolished by Strukton (one of the Kringloop Zuid construction partners) to make way for the tunneling for the A2 motorway near Maastricht. The remaining facade is a colorful patchwork of steel sheeting waste from a steel factory in the neighbourhood. Steel sheeting that does not meet an order’s requirements is discarded even though qualitatively the material is ‘as new’. The Superuse strategy has provided a unique building built for a budget comparable to a standard facility of this size.

HOW We think society can be progressively transformed by creating ingenious, beautiful and functional architectural and social design solutions using that which is considered ‘waste’ by many. Our work strives to harness the full potential of all types of currently underutilised resources (including material, energy, human, food, knowledge, data resources etc.) and, to identify and link surplus or waste outputs with needs or inputs. In this way society can become more sustainable, and, the current huge impact of architecture and design on energy and virgin resource use significantly reduced. To use locally sourced ‘waste’ flows and make optimal functional, aesthetic and environmentally smart use of their properties in design is what we call SUPERUSE. Clever links or shortcuts created between wasted outputs and wanted inputs is what we call ‘CYCLIFIERS’.

WHO Superuse Studios was founded in 1997 by Césare Peeren and Jan Jongert and has become an internationally renowned pioneer in the field of sustainability.

Our Superuse philosophy and design approach is applicable at all project scales and incorporates concepts such as resource and energy efficiency, social design, circularand blue economy, and urban agriculture.

The studios are currently run by 5 engineers specialised in interventions, design, architecture, urbanism and research.

We share our approach, methods and tools through our webplatforms: superuse.org and harvestmap.org; through the book ‘Superuse’; the PBS documentary ‘Superuse’, narrated by Brad Pitt; and, by presenting at conferences worldwide; presenting for TedEX Utrecht; lecturing in Universities across Europe; and, conducting workshops.

We believe architects and designers can play a major role in transforming society by ingeniously re-using and re-linking all the materials, resources and systems that already exist. And we have been developing an approach, methods and tools to achieve this.

These engineers team up in different combinations, and with specialists from other disciplines as required to match a project’s needs. 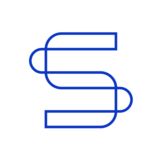