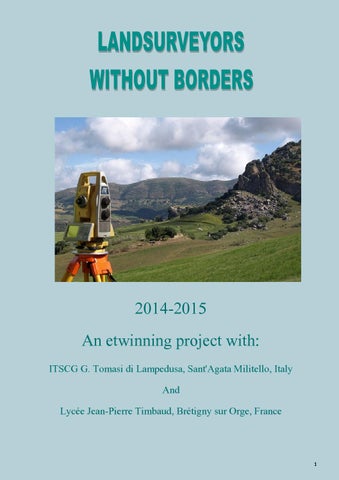 What is landsurveying? Land surveying is the measurement and mapping of our surrounding environment using mathematics, specialised technology and equipment. Surveyors measure just about anything on the land, in the sky or on the ocean bed. They even measure polar ice-caps.

INTRODUCTION Two classes of landsurveying students aged 17 to 19 worked on this project. in 8 French/Italian teams. They first introduced themselves in short movies that they sent to their partners. With the movies and by communicating on the forum, their partners then had to draw a portrait of their partners and publish them on Twinspace. Then, they created topograpphical riddles for their partners to solve. Once solved, they had to write a page with more information about they places they had found. Here are all the pages gathered in this book. We hope that you will enjoy them as much as we did when creating them.

The national domain Marly-le-Roi is a park located in Marly-le-Roi near Paris , on the edge of the forest of Marly. It is managed by the Public Establishment of the Palace, Museum and National Estate of Versailles . Sloping park, on a southern slope of the Seine, its downstream part overlooks the center of Marly , while to the west , the park is adjacent to the forest of Marly and very close to the east of the forest Louveciennes domaniale of which it is separated by the road to Versailles , major roadway and some residential areas. You can still see in the park , large alignments of the time, the footprint of the castle, the trough downstream of the park with two ponds overcome by copies of Marly horses. Much of the original sculptures in the garden are in the Louvre , in the Cour Marly . 5

Sens Cathedral (French: Cathédrale Saint-Étienne de Sens) is a Catholic cathedral in Sens in Burgundy, eastern France. It was one of the earliest Gothic buildings in the country, and the largest of the early Gothic churches. The choir was begun in 1140. As was typical in cathedral construction work progressed westwards, building the nave, with the west front completed around 1200. The structure was finally completed in the 16th century. The architecture of its choir influenced, through the architect William of Sens, that of the choir of Canterbury Cathedral. 6

Vaux-le-Vicomte is a castle located about 6 km east of Melun and 55 km south-east of Paris in the French department of Seine-et-Marne in the Île-de-France. Built between 1656 and 1661 commissioned by Nicolas Fouquet, superintendent of finances of Louis XIV, was the architect Louis Le Vau, the frescoes and decorations inside is occupied Charles Le Brun in collaboration with Pierre Mignard and Pierre Puget, the gardens were designed by the famous landscape architect André Le Nôtre

Following the indications given we found the point and the environment. After drawing the semicircle we found a figure like an autodrome. The indication of Ken Block was essential.

Boissy- Sous- Saint- Yon Starting from the latin name of the town we found the attual name of the city.

Boissiacum in 1488 . The origin of Boissy comes from "buxus"

Latin - Bouis, box - which means both the shrub always green and in derived forms like "buxea" - boisse, buisse - and "buxio" - bush - plant species dense and small sizes. The town's name comes from the Latin buxiacum, buxetum avatar which means a place of boxwood planted. The mention of the nearby town of Saint-Yon has been added by the Bulletin of Acts in 1801 . Many place names are Latin group trained on tree names with the suffix -

etum in the Carolingian period, has been altered in -idum and –ida , feminine form of etumhas was also used for the same purpose. 9

BRETIGNY SUR ORGE The start point is Paris, Notre Dame ; Next I find the station and take the RER C in te direction of Dourdan la foret ; In the subway map I looked for a city that was crossed by a river and found the Orge river ... The city was Bretigny sur Orge

After the war, the base was completely rebuilt, with a new 9000' (3000m) jet runway laid down parallel to the wartime 05/23 main. The wartime runway was reduced in width, resurfaced with asphalt and reused as a taxiway. The secondary 11/29 was also refurbished, however it was closed for the past few years. Aerial photography of the base shows it recently marked with an excellent concrete surface. New hangars and support facilities were built along with a new support area. Today, the base is a modern, fully equipped Nato base.

Cefal첫 Chruch This cathedral is situated seaside Tyrrhenian, in the town Cefal첫 in north of Sicile in Italia. We found this place with intersection of two straight lines, throught two points given for riddle. The coordinates are : x : 414 240,245 Y : 4 210 693,278

This cathedral dates from 1131. It was started in the Norman style.The Cathedral was built in an area of ancient and continuing population. Construction began in 1131 and after 1172 the church stopped. The construction has resumed soon after and finished in 1240.Beyond the crossing, the church is unusual in combining a style which is essentially Romanesque in its massive simple forms, with the pointed arch. The cathedral has a cloister which may be entered from within the church

Team A / Etienne and Marie

Cefalù Chruch The cefalù's cathedral is situated in Cefalù from Sicilia. Tyrrhenian sea go along the coast of Cefalù. Cefalù is located in the north of Sicilia. We found the place by intersection of two straight lines.

This cathedral dates from 1131. It was started in the Norman style.The Cathedral was built in an area of ancient and continuing population. Construction began in 1131 and after 1172 the church stopped. The construction has resumed soon after and finished in 1240.Beyond the crossing, the church is unusual in combining a style which is essentially Romanesque in its massive simple forms, with the pointed arch. The cathedral has a cloister which may be entered from within the church

First, a legend tells us that Capo d'Orlando was founded by the child of Eole (God of wind). Another says the name of the city was the choice of the emperor Charlemagne as a souvenir of the incredible Roland. This city is the birthplace of a famous poet named Lucio Piccolo. Moreover the town has an important basket ball team named Orlandina Basket. In addition you have an awesome view on the marvellous Aeolian island when you are on top of the Capo d'Orlando's mount. But this city isn't touristic just for this view, in fact around the city you can see a lot of orange trees and lemon trees. The Capo d'Orlando's development began in 1920 and now the city have a harbour. So we can say it's an important place for Sicily 13

Capo d'Orlando Our partners gave us coordinates of points they had choose in UTM Translator system and the gisements from those points until the wanted point. Those coordonates was 479980.58;4209452.75 for Galati and 442711.12;4207876.31 for Santo Stefano di Camastra. All those point are in the seafront

Capo Orlando is a small seaside resort situated on a headland. According to legend, the town was founded in the 13C Before Christ by the son of Aeolus. Another legend says that Charlemagne passed this way and gave the town its present name in memory of his knight Roland (Orlando in Italian). In Capo orlando we can enjoy a dip in the sea and take some time to stroll along the lively Via Piave, which runs parallel to the attractive beach and the sea. There we can visit Saint Mary of Orlando Cape This small church was built in the 17C at the end of a promontory of the Orlando Cape, over the ruins of the Castle of Orlando. The panoramic site there is admirable.

Castello Gallego – Sant’Agata di Militello The village was founded according to legend by some fishermen of Catania who escaped a shipwrecked built the village and dedicated it to their patroness saint, Sant’Agata. The castle is located near highway A20 it is in the city of Sant'Agata Di Militello naer the Tyrrhenian sea. Sant'Agata Di Militello is on the coast of Sicily. Geographical coordinates of the place : 467 840,0644 4 213 660,5680

The place is a castle built in XV century. It is made of stone, it looks nice and very beautiful. It is part of the heritage of Sicily. This bulding has become a tourist sites. The building, with imposing shapes and stern archutecture, is protected by cylindrical towers in medieval style and it includes a curtyard full of trees. The building also includes in its wing an elegant chapel entirely supplied with classical elements 15

It's a theater of antiquity Greco-Roman, and the most popular ruin in Sicily.

The building of this theater was began on the third century before J-C, in last century the theater be transformed by the Roman for the games of amphitheater.

Panarea restaurant "Da Adelina" To find the solution of the riddle we used a software which can search the intersection between two straight lines. We find | X= 506694,49 Y= 4276593,12|. It is situated in Sicilia,Italy.

John tesoriero was a good cook and with her wife they decided to open a restaurant : the Trattoria Da Adelina, in 1965. Since then the restaurant receives thousands of tourists who have visited the island of Panarea and want eat culinary traditions. In summer 2009, the Adelina offers additional space for its clients, the new terrace created to make another thing in quality and give an open space under the magic sky of Panarea.

Etna is a volcano situated in Italy, in the east of Sicily, it's at proximity of Catane town, the second most populated of Sicily.

It's a screenshot of Etna Volcano in Internet.

It is the highest European volcano, it's one of the most activated volcano in the world, It's 3300 meter tall.

ETNA VOLCANO the point is located at the intersection of two straight, the coordonĂŠe is for a point B: East: 375215,8 et North: 4127946,87, afeter i'am use a gisementthe points B to places to look for and from point A to places as, Of course I'm use a calculator this programe is intersection..

The Etna is a symbol of sicillia, It attracts a lot of tourists. Etna 3323 meters high, is the largest volcano in Europe still active. Is the boss of Island, symbol of happiness and bading. Residents of nearby village, your name ''LA MAMAâ&#x20AC;?. it caused many damage for the mane. The final result of our etwinning project

The final result of our etwinning project