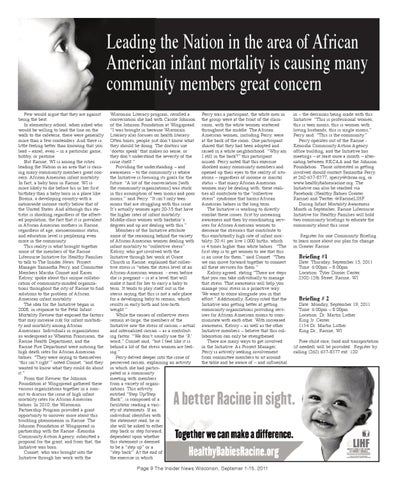 Leading the Nation in the area of African American infant mortality is causing many community members great concern Few would argue that they are against being the best. In elementary school, when asked who would be willing to lead the line on the walk to the cafeteria, there were generally more than a few contenders. And there is little feeling better than knowing that you lead – excel, even – in a particular game, hobby, or pastime. But Racine, WI is among the cities leading the Nation in an area that is causing many community members great concern: African American infant mortality. In fact, a baby born in Racine, WI is more likely to die before his or her first birthday than a baby born in a place like Bosnia, a developing country with a nationwide income vastly below that of the United States. And although this statistic is shocking regardless of the affected population, the fact that it is prevalent in African American mothers in Racine, regardless of age, socioeconomic status, and education level is perplexing even more in the community. This reality is what brought together some of the members of the Racine Lifecourse Initiative for Healthy Families to talk to The Insider News. Project Manager Samantha Perry, and Committee Members Marsha Connet and Karen Kelroy, spoke about this unique collaboration of community-minded organizations throughout the city of Racine to find solutions to the problem of African American infant mortality. The idea for the Initiative began in 2008, in response to the Fetal Infant Mortality Review that exposed the factors that may increase risk for infant morbidity and mortality among African Americans. Individuals in organizations as widespread as Wheaton Franciscan, the Racine Health Department, and the Racine Fire Department were noticing the high death rates for African American babies. “They were saying to themselves ‘this isn’t right’” noted Connet, “and they wanted to know what they could do about it.” From that Review, the Johnson Foundation at Wingspread gathered these various organizations together in a summit to discuss the issue of high infant mortality rates for African American babies. In 2010, the Wisconsin Partnership Program provided a grant opportunity to uncover more about this troubling phenomenon in Racine. The Johnson Foundation at Wingspread in partnership with the Racine -Kenosha Community Action Agency, submitted a proposal for the grant, and from that, the Initiative was born. Connet, who was brought into the Initiative through her work with the

Wisconsin Literacy program, recalled a conversation she had with Carole Johnson of the Johnson Foundation at Wingspread: “I was brought in because Wisconsin Literacy also focuses on health literacy. Often times, people just don’t know what they should be doing. The doctors use ‘doctor speak’ that makes no sense, or they don’t understand the severity of the issue itself.” Providing the understanding – and awareness – to the community is where the Initiative is focusing its goals for the future. “A lot of the conversation [with the community organizations] was stuck in this assumption of teen moms and poor moms,” said Perry. “It isn’t only teen moms that are struggling with this issue. It’s actually women ages 20-35 that have the higher rates of infant mortality. Middle-class women with bachelor’s degrees and up are dealing with this.” Members of the Initiative attribute some of the reasoning behind the variety of African American women dealing with infant mortality to “collective stress”. Kelroy, who got involved with the Initiative through her work at Grace Church in Racine, explained that collective stress is “when the stress level of an African-American woman - even before she is pregnant – is at a level that will make it hard for her to carry a baby to term. It tends to play itself out in the uterus saying that this is not a safe place for a developing baby to remain, which results in early birth and low-birth weight.” While the causes of collective stress remain at-large, the members of the Initiative saw the stress of racism – actual and internalized racism – as a contributing factor. “We don’t usually use the ‘R’ word,” Connet said, “but I feel like it is behind a lot of the stress women are feeling.” Perry delved deeper into the issue of perceived racism, explaining an activity in which she had participated in a community meeting with members from a variety of organizations. This activity, entitled “Step Up/Step Back”, is composed of a facilitator reading a variety of statements. If an individual identifies with the statement read, he or she will be asked to either step back or step forward, dependent upon whether this statement is deemed to be a “step up” or a “step back”. At the end of the exercise in which

Perry was a participant, the white men in the group were at the front of the classroom, with the white women scattered throughout the middle. The African American women, including Perry, were at the back of the room. One participant shared that they had been adopted and raised in a white neighborhood. “Why am I still in the back?” this participant mused. Perry noted that this exercise shocked many community members and opened up their eyes to the reality of situations – regardless of income or marital status – that many African American women may be dealing with; these realities all contribute to the “collective stress” syndrome that harms African American babies in the long term. The Initiative is working to directly combat these issues, first by increasing awareness and then by coordinating services for African American women to decrease the stressors that contribute to this exorbitantly high rate of infant mortality, 20.41 per live 1,000 births, which is 4 times higher than white babies. “The first step is to get women to see that this is an issue for them,” said Connet. “Then we can move forward together to connect all these services for them.” Kelroy agreed, stating “There are steps that you can take individually to manage that stress. That awareness will help you manage your stress in a proactive way. We want to come alongside you in that effort.” Additionally, Kelroy cited that the Initiative was getting better at getting community organizations providing services for African American moms to communicate with each other. With increased awareness, Kelroy – as well as the other Initiative members – believe that this collaboration can only be strengthened. There are many ways to get involved in the Initiative. As Project Manager, Perry is actively seeking involvement from committee members to sit around the table and be aware of – and influential

in – the decisions being made with this Initiative. “This is professional women, this is teen moms, this is women with loving husbands, this is single moms,” Perry said. “This is the community.” Perry operates out of the Racine Kenosha Community Action Agency office building, and the Initiative has meetings – at least once a month – alternating between RKCAA and the Johnson Foundation. Those interested in getting involved should contact Samantha Perry at 262-637-8377, sperry@rkcaa.org, or www.healthybabiesracine.org. The Initiative can also be reached via Facebook (Healthy Babies Greater Racine) and Twitter @RacineLIHF. During Infant Mortality Awareness Month in September, Racine Lifecourse Initiative for Healthy Families will hold two community briefings to educate the community about this issue. Register for one Community Briefing to learn more about our plan for change in Greater Racine.