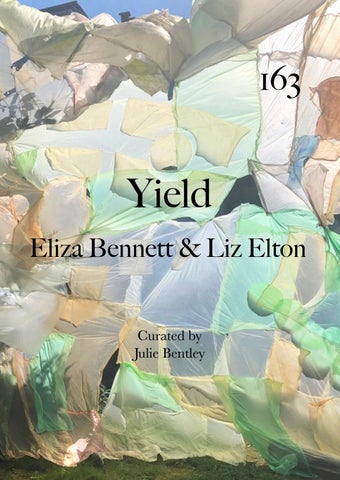 Yield; to produce or provide. To gain or give way. To relinquish possession. To concede. Eliza Bennett is fascinated by the intricate web of relations taking place in subject formation. Her work coalesces within the frame of archiving, miscommunication and poetics. Landscape and how to continue are central to Liz Eltonâ&#x20AC;&#x2122;s practice. She thinks about our use and waste of materials, our impact on the landscape, time and scale, working in between painting and more sculptural concerns. Through site-specific installation, Bennett and Elton address ideas concerned with materiality, agency and formation.

Eliza Bennett sat down with art historian, writer and curator Hector Campbell to discuss creative triggers, visual cyphers and conceptual objectives, as well as providing an insight into the works she’ll be exhibiting in Yield. Hector Campbell : Your artistic practice is often initiated by either a directly encountered experience or an impromptu researched finding, both manifested by chance although with perhaps differing probabilities. Do you observe a weighted frequency to either one of these creative triggers? And do you notice a marked difference in the artwork that materialised from these two starting points? Eliza Bennett : I think these ‘creative triggers’ are one and the same, I cannot separate them. There are any number of choices presenting themselves and I’ve learnt to recognize the instance when the materials, either conceptual or tangible, present something unexpected as fertile creative ground. More often than not it is when an encountered experience and a researched finding coalesce that my visual-tactile productions find their form. H.C : Your artistic output exists within a variety of different mediums, including the more haptic, perhaps conventional, implementation of mark-making or sculpting, as well as the more mediated, increasingly digital, vehicles of photography and videography. How do you

approach the marriage of a conceptual objective with a material outcome? Opposite page: Work in progress by Eliza Bennett

Work in progress by Eliza Bennett.

E.B : Whilst a conceptual objective towards a predestined outcome predominated my earlier works, over time I have identified that â&#x20AC;&#x2DC;successesâ&#x20AC;&#x2122; happen in those instances when Iâ&#x20AC;&#x2122;m responding intuitively to material processes. The resulting visual cyphers, potent with as-yet undefined meanings, trigger a dialogue and the concepts attached can proliferate. Therefore, in most instances, it would be truer to describe it as the marriage of a material objective with a conceptual outcome. H.C : In discussing the process of creating some of the new works on display in Yield, there were times when it became clear you had made a decision in favour of conceptual concerns, and others when there had been a conceptual compromise in place of more aesthetic adjustment. How do you aim to achieve a balance of both the theoretical and creative forces driving your artworks?

E.B : The haptic study of phenomena through direct experience is my creative driving force, with the theory attaching itself as the material process evolves. I often follow distinct repetitive processes with a desired aesthetic outcome in mind. However, I remain open to adaptation if another alternative presents itself as a byproduct of the initial process. The visual cyphers I create have the potential to be much more nuanced, and complex, than my own initial intentions. These cyphers often seem imbued with a kind of intelligence that I have been a conduit for, so I am not overly concerned about stating my objectives in a definite way. H.C : ‘Coherent Disturbance’, your series of computer dictation miscommunications, appealed to me almost as a form of found poetry; highlighting our superiority to technology in relation to the comprehension of complex ideas, but also the possibility of creation from error. What did you learn from these entirely accidental occurrences? And how did you seek to incorporate both these learnings and the ‘Coherent Disturbances’ themselves, into your work? E.B : Within my practice I try to interrogate my own experiences and my relation to things. To me these encompass both material objects, and more elusive, elements, such as ecology and relationships. My interests repeatedly coalesce within the framework of subject formation and miscommunication. There is a fluidity in how individuals and our forms of communication can be interpreted.

I engage with this ambivalent motion by foregrounding process before signification, with the intended aim of presenting the possibility of an active field of potential. Via self-made symbols of positioned or found objects, as well as technologically-mediated ‘accidents’, these representations of ‘becoming’, and the co-dependence of their aggregate parts, disrupt the definition of an independent ‘subject’. This opens up many of the facets of what I term ‘Coherent Disturbance’. A video that I’ve recently been working on shows highlight extracts from when I was stalking the deer in nearby woods with my camera. Their response to my presence clearly marked me out as the predatory species. During the process of filming a glitch occurred within the camera, and this resistance to capture is what excites me about developing the piece. In the process of interaction between idea, apparatus, body and matter, new forms arose with a coherence all of their own. H.C : Finally, the word ‘Yield’, which gives this exhibition its title, can contain a myriad of interpretations and connotations, positive and negative, as both a verb or noun, depending on one’s disposition. How did you choose to understand the titular term? And how can it relate to either your work or research? E.B : ‘Yield’ is a term that initially brings to mind ‘economics’, in terms of material profit and gain, and an ambition exists within my work to resist the prevailing economic order by maintaining lines of communication with that which is deemed useless or unworthy. This not only plays out conceptually, but also in my material choices of faded paper, mistakes and other residue. The materials ‘give way’ to chance encounters, which in turn offer up their own reward.

Opposite page: Work in progress by Eliza Bennett.

Liz Elton met up with Hector Campbell to talk fragility and impermanence in art, ecological materials, John Ruskin and to discuss her new site-specific work for Yield. Hector Campbell : Vegetable dyes from kitchen waste and cornstarch recycling bag material form the basis of many of your artworks. Could you explain the conceptual underpinning behind this use of unconventional artistic mediums? How have you had to adapt your creative practice to facilitate their use? Liz Elton : My practice starts in landscape painting, wondering how we continue and capturing fragility and impermanence. I’ve been using compostable cornstarch as a ground for some time as it embodies these qualities. It is light, translucent and floats like parachute silk as the air moves around it. It’s made from crops such as corn or potatoes yet is often used to make food waste recycling bags. My work for the John Moores Painting Prize 2018,‘One Hundred Harvests’, used 100 of these bags and referenced research indicating our farming practices may mean our land will only support a further hundred harvests. My range of materials continues to expand. Besides traditional materials such as paint and pigments, I make dyes from food waste and also use food colouring, seeds and other organic materials, embedding references to sustenance and waste in the work. As I have developed my practice it has naturally spilled beyond the studio into the kitchen and garden, and from traditional gallery spaces into gardens, fields and parks.

H.C : Many of the aforementioned ecological and natural materials incorporated within your artworks were manufactured in part for their inherent eventual decomposition, an attribute normally avoided in artmaking. How do you view this creative contradiction? Does it lead to issues when trying to commercialise or maintain your practice? L.E : Artists have been making work involving impermanence and destruction for many years and for many reasons, but for me by embracing intentional decomposition I hope the viewer will engage with time passing as well as both our own fragility and that of the landscape. The contradiction you mention is inherent to my practice and I think people can understand and embrace that. I am currently working on a commission for a large cornstarch piece which will only be exhibited for a limited time. I make archival quality prints of the works both outside and in the studio that can enter collections as a memory of the original piece and I enjoy the sense of absence captured in these prints. There are some side benefits that result from my practice, for instance the materials I use are very light and I enjoy the freedom this gives me to transport and install really large works with very limited support.

Work in progress by Liz Elton.

Liz Elton in her studio.

H.C : For Yield you will be exhibiting artworks both inside and outside the 163 gallery space, the former of which, ‘Graft’, responds to your recent reading of ‘The Book of Skin’ by Steven Connor. What attracted you to this particular subject matter? And how did you approach the process leading to ‘Graft’s creation? L.E : It seems natural to connect the materiality of the landscape work and our own materiality. The ground I have been using for my recent paintings has a skinlike quality, and some of my dyes come from fruit and vegetable skins. The title ‘Graft’ speaks both about our fragile bodies and about our interdependence with a fragile natural world. Connor talks about our skin as the point at which we engage with the world, and as a ‘soft clock’ that is marked by experience but may also recover. This new piece has also brought in more materials beyond the food waste dyes and silk, including framing with wood, willow and grafting tape. H.C : The second artwork on display in Yield will involve an element of site-specificity resulting from your research into the eminent Victorian art critic John Ruskin, and in particular his habitation of the Herne Hill area, at the bicentennial celebration of his birth. What do you feel that site-specificity can add to an artwork? And how has your research influenced or educated your practice?

L.E : Ruskin lived in Herne Hill for over 40 years, only minutes walk from where Julie’s gallery is now. The development of the railways caused him to leave this area to live in the Lake District, so I have been thinking about the rapid growth of housing in Herne Hill and the pattern of many gardens this creates. When studying the Pre-Raphaelites, I was struck by Ruskin’s advice to them to “go back to nature”. Site specificity can work in many ways, but I hope thinking about this recent history, and how the landscape has changed in a relatively short time, may make us think about how it may change in the future, how landscape shifts. Seeds from native medicinal plants such as yarrow, chamomile and feverfew are incorporated into this work, the kinds of plants that tend to establish themselves on unmanaged land (such as beside a railway line), so maybe viewers will think to the future and the possibility of new growth. H.C : Finally, the word ‘Yield’, which gives this exhibition its title, can contain a myriad of interpretations and connotations, positive and negative, as both a verb or noun, depending on one’s disposition. How did you choose to understand the titular term? And how can it relate to either your work or research? L.E : I love the range of meanings of ‘Yield’, referring to both the production of crops from land and also to compromise. Both seem relevant to my concerns about how we continue; the sustenance and land required, and potentially the reassessment of our relationship with the natural world.

Opposite page: Work in progress by Liz Elton.