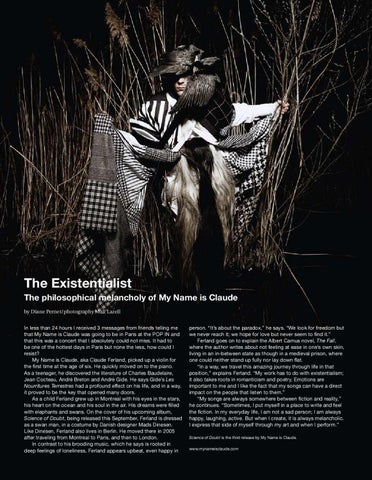 The Existentialist The philosophical melancholy of My Name is Claude by Diane Pernet/photography Mali Lazell In less than 24 hours I received 3 messages from friends telling me that My Name is Claude was going to be in Paris at the POP IN and that this was a concert that I absolutely could not miss. It had to be one of the hottest days in Paris but none the less, how could I resist? My Name is Claude, aka Claude Ferland, picked up a violin for the first time at the age of six. He quickly moved on to the piano. As a teenager, he discovered the literature of Charles Baudelaire, Jean Cocteau, André Breton and André Gide. He says Gide’s Les Nourritures Terrestres had a profound effect on his life, and in a way, it proved to be the key that opened many doors. As a child Ferland grew up in Montreal with his eyes in the stars, his heart on the ocean and his soul in the air. His dreams were filled with elephants and swans. On the cover of his upcoming album, Science of Doubt, being released this September, Ferland is dressed as a swan man, in a costume by Danish designer Mads Dinesen. Like Dinesen, Ferland also lives in Berlin. He moved there in 2005 after traveling from Montreal to Paris, and then to London.   In contrast to his brooding music, which he says is rooted in deep feelings of loneliness, Ferland appears upbeat, even happy in

person. “It’s about the paradox,” he says. “We look for freedom but we never reach it; we hope for love but never seem to find it.” Ferland goes on to explain the Albert Camus novel, The Fall, where the author writes about not feeling at ease in one’s own skin, living in an in-between state as though in a medieval prison, where one could neither stand up fully nor lay down flat. “In a way, we travel this amazing journey through life in that position,” explains Ferland. “My work has to do with existentialism; it also takes roots in romanticism and poetry. Emotions are important to me and I like the fact that my songs can have a direct impact on the people that listen to them.” “My songs are always somewhere between fiction and reality,” he continues. “Sometimes, I put myself in a place to write and feel the fiction. In my everyday life, I am not a sad person; I am always happy, laughing, active. But when I create, it is always melancholic. I express that side of myself through my art and when I perform.”  Science of Doubt is the third release by My Name is Claude. www.mynameisclaude.com 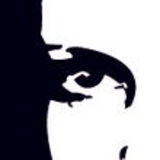