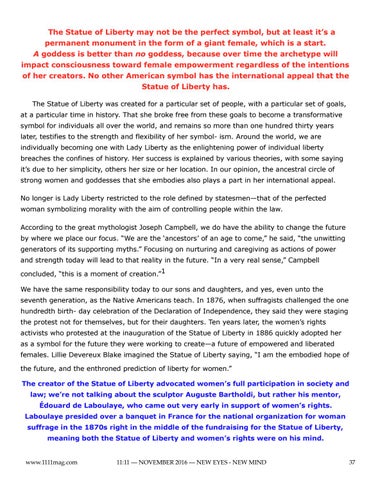 The Statue of Liberty may not be the perfect symbol, but at least it’s a permanent monument in the form of a giant female, which is a start. A goddess is better than no goddess, because over time the archetype will impact consciousness toward female empowerment regardless of the intentions of her creators. No other American symbol has the international appeal that the Statue of Liberty has. The Statue of Liberty was created for a particular set of people, with a particular set of goals, at a particular time in history. That she broke free from these goals to become a transformative symbol for individuals all over the world, and remains so more than one hundred thirty years later, testifies to the strength and flexibility of her symbol- ism. Around the world, we are individually becoming one with Lady Liberty as the enlightening power of individual liberty breaches the confines of history. Her success is explained by various theories, with some saying it’s due to her simplicity, others her size or her location. In our opinion, the ancestral circle of strong women and goddesses that she embodies also plays a part in her international appeal. No longer is Lady Liberty restricted to the role defined by statesmen—that of the perfected woman symbolizing morality with the aim of controlling people within the law. According to the great mythologist Joseph Campbell, we do have the ability to change the future by where we place our focus. “We are the ‘ancestors’ of an age to come,” he said, “the unwitting generators of its supporting myths.” Focusing on nurturing and caregiving as actions of power and strength today will lead to that reality in the future. “In a very real sense,” Campbell concluded, “this is a moment of creation.”1 We have the same responsibility today to our sons and daughters, and yes, even unto the seventh generation, as the Native Americans teach. In 1876, when suffragists challenged the one hundredth birth- day celebration of the Declaration of Independence, they said they were staging the protest not for themselves, but for their daughters. Ten years later, the women’s rights activists who protested at the inauguration of the Statue of Liberty in 1886 quickly adopted her as a symbol for the future they were working to create—a future of empowered and liberated females. Lillie Devereux Blake imagined the Statue of Liberty saying, “I am the embodied hope of the future, and the enthroned prediction of liberty for women.” The creator of the Statue of Liberty advocated women’s full participation in society and law; we’re not talking about the sculptor Auguste Bartholdi, but rather his mentor, Édouard de Laboulaye, who came out very early in support of women’s rights. Laboulaye presided over a banquet in France for the national organization for woman suffrage in the 1870s right in the middle of the fundraising for the Statue of Liberty, meaning both the Statue of Liberty and women’s rights were on his mind. 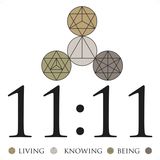 11:11 MAGAZINE - Devoted to the Journey of the Soul

The New Eyes and New Mind will embark on an unknown adventure... It will not know where it is going, nor what it is doing. All will be from...

The New Eyes and New Mind will embark on an unknown adventure... It will not know where it is going, nor what it is doing. All will be from...