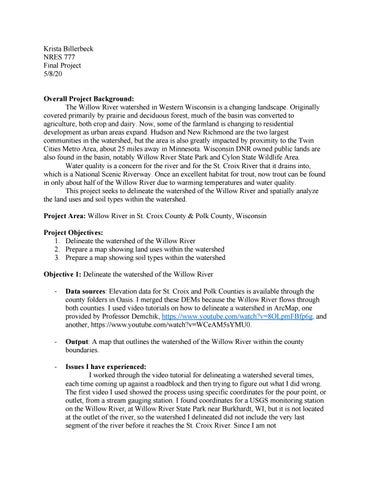 Data sources: Elevation data for St. Croix and Polk Counties is available through the county folders in Oasis. I merged these DEMs because the Willow River flows through both counties. I used video tutorials on how to delineate a watershed in ArcMap, one provided by Professor Demchik, https://www.youtube.com/watch?v=8OLpmFBfp6g, and another, https://www.youtube.com/watch?v=WCeAM5sYMU0.

Output: A map that outlines the watershed of the Willow River within the county boundaries.

Issues I have experienced: I worked through the video tutorial for delineating a watershed several times, each time coming up against a roadblock and then trying to figure out what I did wrong. The first video I used showed the process using specific coordinates for the pour point, or outlet, from a stream gauging station. I found coordinates for a USGS monitoring station on the Willow River, at Willow River State Park near Burkhardt, WI, but it is not located at the outlet of the river, so the watershed I delineated did not include the very last segment of the river before it reaches the St. Croix River. Since I am not

close to the Willow River to physically obtain a coordinate at the outlet of the river, I used an additional video that showed finding a pour point using the Flow Accumulation layer created as part of the delineation process (ttps://www.youtube.com/watch?v=WCeAM5sYMU0). This way, I could select a specific point on a pixel of the flow accumulation close to the outlet of the river to better delineate the whole watershed. Something I did not realize in my first tries at delineating the watershed is that the area I select to determine flow direction, fill erroneous sinks, and flow accumulation has to completely encompass the watershed. This sounds obvious now, but the area I selected to perform these functions in my first few attempts was smaller than the whole Willow River watershed actually is. So, I only ended up delineating a portion of the watershed within the polygon I had created to perform those functions. I initially was only working with St. Croix County data, so then had to add Polk County data where the start of the Willow River is. The new video I used shows the process in ArcGIS Pro, so I tried doing it in this program until I realized that the hydrology toolbox was not available. Then, I was able to go back to ArcMap, add the new data, and follow a combination of the tutorial videos to finish the process. Objective 2: Prepare a map showing land uses within the watershed. -

Data sources: Land use data is available through the Wisconsin folder of Oasis.

Output: A map that includes land uses within the watershed.

Issues I have experienced: I had a hard time adding the land use data because I was only looking for data in the form of a shapefile. I was only trying to add it by doing ‘add new feature class,’ and only shapefiles appeared as available data options. Looking in the folders, it appeared that the files I was looking for were ‘tiff files.’ I was able to add the data by using the ‘add data’ function which I had apparently forgotten about and didn’t realize that ‘add data’ and ‘add new feature class’ were able to add different forms of data. I also got stuck when I tried to clip the land use data to the boundary of the watershed. The watershed boundary did not appear as an option for the clip extent, and I realized it was because it was not a shapefile. One of the videos showed me how to change the file to a vector polygon. Then, I was able to export the land use data to the clip of the watershed boundary. Some of the land use data I was not able to convert to a shapefile to clip to the watershed boundary because I lost the predetermined color map associated with the land uses. This is why one of the maps shows the watershed boundary on top of the county land use data. The symbology of this data included a large number of extra values that did not show up in the map, and all of the values showed up as numbers, not as descriptions. I was able to find the descriptions for the numbers by going into the attribute table and changing them in the legend. Then, I was able to delete the extra values from the legend, keeping only the ones that appear in the map.

Objective 3: Prepare a map showing the soil types within the watershed. -

Output: A map that includes soil type within the watershed boundary.

Issues I have experienced: The SSURGO soil data was very detailed, so I used more general soil type data to be able to classify according to drainage types. I had trouble changing the soil types from numbers to descriptions. I was able to find corresponding soil categories for the numbers given and then change the labels manually.

Figure 2. Map of Wisconsin with Willow River watershed in red

The Willow River watershed in Western Wisconsin is a changing landscape. Originally covered primarily by prairie and deciduous forest, much of the basin was converted to agriculture, both crop and dairy. Now, some of the farmland is changing to residential development as urban areas expand. Hudson and New Richmond are the two largest communities in the watershed, but the area is also greatly impacted by proximity to the Twin Cities Metro Area, about 25 miles away in Minnesota. Wisconsin DNR owned public lands are also found in the basin, notably Willow River State Park and Cylon State Wildlife Area. Water quality is a concern for the river and for the St. Croix River that it drains into, which is a National Scenic Riverway. Once an excellent habitat for trout, now trout can be found in only about half of the Willow River due to warming temperatures and water quality. This project seeks to delineate the watershed of the Willow River and spatially analyze the land uses and soil types within the watershed. 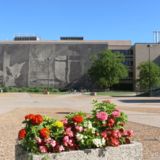