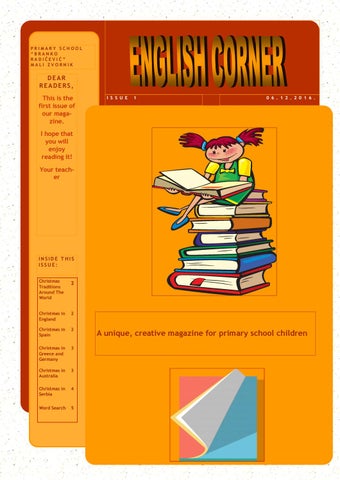 DEAR READERS, This is the first issue of our magazine.

I hope that you will enjoy reading it! Your teacher

INSIDE THIS ISSUE: Christmas Traditions Around The World

Christmas in Greece and Germany

Christmas Traditions Around The World CHRISTMAS IN ENGLAND In England families often celebrate Christmas together. Most families have a Christmas tree in their house for Christmas. The decorating of the tree is usually a family occasion, with everyone helping.

Most villages, towns and cities are decorated with Christmas lights over Christmas. Often a famous person switches them on. The most famous Christmas lights in England are in Oxford Street in London. Every year they get bigger and better. Children believe that Father Christmas or Santa leaves presents in stockings. These are normally hung up by the fire or by the children's beds on Christmas Eve. Children sometimes leave out mince pies and brandy for Father Christmas to eat and drink when he visits them. Children also write letters to Father Christmas/Santa listing their wishes. Nativity Plays and Carol Services are also very popular at Christmas time in England.

Most people in Spain go to Midnight Mass. Most families eat their main Christmas meal on Christmas Eve before the service. The traditional Spanish Christmas dinner is 'Pavo

Trufado de Navidad' which is turkey stuffed with truffles (the mushrooms). After the midnight service, people walk through the streets carrying torches, playing guitars and beating on tambourines and drums. Apart from Christmas, there is another festival that is celebrated in Spain that is about the Christmas Story. It is called Epiphany and is celebrated on 6th January. In Spanish, Epiphany is called 'Fiesta de Los tres Reyes Mages': in English this means 'The festival of the three Magic Kings'. Epiphany celebrates when the Kings or Wise Men brought gifts to the baby Jesus. Children have some presents on Christmas Day, but most are opened at Epiphany. Some children believe that the Kings bring presents to them at Epiphany.

CHRISTMAS IN GREECE The Christmas season in Greece begins on December 6th, which is Saint Nicolas day, and ends on January 6th, the day of Epiphany. Streets are packed with people buying Christmas presents for their loved ones, as well as Christmas carolers singing Christmas songs. On Christmas Eve, children, especially boys, often go out singing 'kalanda' (carols) in the streets. They play drums and triangles as they sing. Christmas Trees are popular in Greece. But an older and more traditional decoration is a shallow wooden bowl with a piece of wire is suspended across the rim. A sprig of basil wrapped around a wooden cross hangs from the wire. Some water is kept in the bowl to keep the basil alive and fresh.

Christmas Tree are very important in Germany. The Christmas tree is traditionally brought into the house on Christmas Eve. In some parts of Germany, during the evening the family would read the Bible and sing Christmas songs. Germany is well known for its Christmas Markets where all

CHRISTMAS IN AUSTRALIA In Australia, Christmas comes in the towards the beginning of the summer holidays! Children have their summer holidays from mid December to early February, so some people might even be camping at Christmas. When Santa gets to Australia, he gives the

reindeer a rest and uses kangaroos. He also changes his clothes for less 'hot' ones!

In Serbia, the main Church is the Orthodox Church and people still use the old 'Julian' Calendar, which means that Christmas Eve is on 6th January and Christmas Day is on the 7th January! During Advent, some people fast and they don't eat food that comes from animals (meat, milk, eggs, etc.). On Christmas Eve (called 'Badnji dan' during the day and 'Badnje veče' after sunset), families gather and many people fast. It is the last day of the Christmas fast. Christmas is a very religious holiday and most people go to the Christmas Services. On Christmas Day the dawn is greeted with church bells ringing and sometimes firing guns into the air! The first person to enter a house on Christmas Day is called a “polaznik” and it's thought to bring luck to the house and family. At Christmas a special kind of bread is eaten. It's called 'česnica' and is made in a round shape. Each member of the family gets a piece (and the house does too). There is a coin hidden in it and whoever gets the coin will be particularly fortunate in the next year! Other popular Christmas dishes include “pečenica” (roast pork), “sarma“(cabbage stuffed with rice and ground meat) and lots of cakes! Traditional Serbian customs have also mixed with western customs. For example people also have Christmas Trees but they are decorated on New Year's Eve, not at Christmas!

The words can be in any direction and backwards 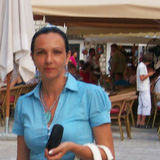