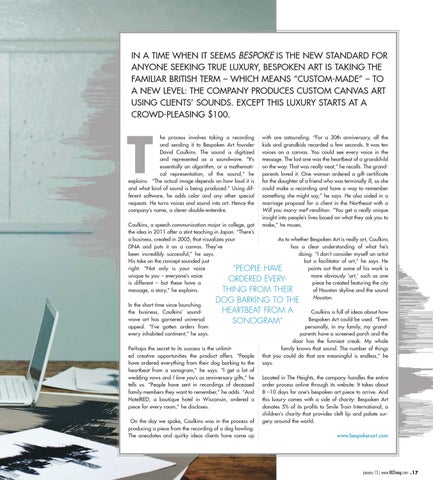 IN A TIME WHEN IT SEEMS BESPOKE IS THE NEW STANDARD FOR ANYONE SEEKING TRUE LUXURY, BESPOKEN ART IS TAKING THE FAMILIAR BRITISH TERM – WHICH MEANS “CUSTOM-MADE” – TO A NEW LEVEL: THE COMPANY PRODUCES CUSTOM CANVAS ART USING CLIENTS’ SOUNDS. EXCEPT THIS LUXURY STARTS AT A CROWD-PLEASING $100.

he process involves taking a recording and sending it to Bespoken Art founder David Caulkins. The sound is digitized and represented as a soundwave. “It’s essentially an algorithm, or a mathematical representation, of the sound,” he explains. “The actual image depends on how loud it is and what kind of sound is being produced.” Using different software, he adds color and any other special requests. He turns voices and sound into art. Hence the company’s name, a clever double-entendre.

with are astounding. “For a 30th anniversary, all the kids and grandkids recorded a few seconds. It was ten voices on a canvas. You could see every voice in the message. The last one was the heartbeat of a grandchild on the way. That was really neat,” he recalls. The grandparents loved it. One woman ordered a gift certificate for the daughter of a friend who was terminally ill, so she could make a recording and have a way to remember something she might say,” he says. He also aided in a marriage proposal for a client in the Northeast with a Will you marry me? rendition. “You get a really unique insight into people’s lives based on what they ask you to make,” he muses.

Caulkins, a speech communication major in college, got the idea in 2011 after a stint teaching in Japan. “There’s As to whether Bespoken Art is really art, Caulkins a business, created in 2005, that visualizes your has a clear understanding of what he’s DNA and puts it on a canvas. They’ve doing. “I don’t consider myself an artist been incredibly successful,” he says. but a facilitator of art,” he says. He His take on the concept sounded just points out that some of his work is right. “Not only is your voice “PEOPLE HAVE more obviously ‘art,’ such as one unique to you – everyone’s voice ORDERED EVERYpiece he created featuring the city is different – but these have a THING FROM THEIR of Houston skyline and the sound message, a story,” he explains. Houston. DOG BARKING TO THE In the short time since launching HEARTBEAT FROM A Caulkins is full of ideas about how the business, Caulkins’ soundBespoken Art could be used. “Even wave art has garnered universal SONOGRAM” personally, in my family, my grandappeal. “I’ve gotten orders from parents have a screened porch and the every inhabited continent,” he says. door has the funniest creak. My whole family knows that sound. The number of things Perhaps the secret to its success is the unlimited creative opportunities the product offers. “People that you could do that are meaningful is endless,” he have ordered everything from their dog barking to the says. heartbeat from a sonogram,” he says. “I get a lot of wedding vows and I love you’s as anniversary gifts,” he Located in The Heights, the company handles the entire tells us. “People have sent in recordings of deceased order process online through its website. It takes about family members they want to remember,” he adds. “And 8 –10 days for one’s bespoken art piece to arrive. And HotelRED, a boutique hotel in Wisconsin, ordered a this luxury comes with a side of charity: Bespoken Art piece for every room,” he discloses. donates 5% of its profits to Smile Train International, a children’s charity that provides cleft lip and palate surOn the day we spoke, Caulkins was in the process of gery around the world. producing a piece from the recording of a dog howling. The anecdotes and quirky ideas clients have come up www.bespokenart.com 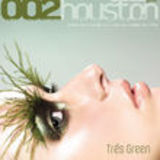