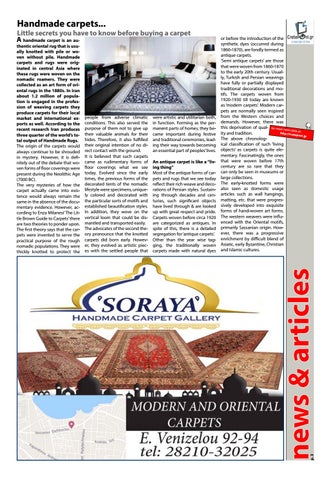 people from adverse climatic conditions. This also served the purpose of them not to give up their valuable animals for their hides. Therefore, it also fulfilled their original intention of no direct contact with the ground. It is believed that such carpets came as rudimentary forms of floor coverings what we see today. Evolved since the early times, the previous forms of the decorated tents of the nomadic lifestyle were specimens, uniquely colored and decorated with the particular sorts of motifs and established beautification styles. In addition, they wove on the vertical loom that could be dismantled and transported easily. The advocates of the second theory pronounce that the knotted carpets did born early. However, they evolved as artistic pieces with the settled people that

were artistic and utilitarian both, in function. Forming as the permanent parts of homes, they became important during festive and traditional ceremonies, leading their way towards becoming an essential part of peoples’ lives. An antique carpet is like a “living thing” Most of the antique forms of carpets and rugs that we see today reflect their rich weave and decorations of Persian styles. Sustaining through decades and centuries, such significant objects have lived through & are looked up with great respect and pride. Carpets woven before circa 1920 are categorized as antiques. In spite of this, there is a detailed segregation for ‘antique carpets’. Other than the year wise tagging, the traditionally woven carpets made with natural dyes

thentic oriental rug that is usually knotted with pile or woven without pile. Handmade carpets and rugs were originated in central Asia where these rugs were woven on the nomadic roamers. They were collected as an art form of oriental rugs in the 1880s. In iran about 1.2 million of population is engaged in the profession of weaving carpets they produce carpets for their local market and international exports as well. According to the recent research Iran produces three quarter of the world’s total output of Handmade Rugs. The origin of the carpets would always continue to be shrouded in mystery. However, it is definitely out of the debate that woven forms of floor coverings were present during the Neolithic Age (7000 BC). The very mysteries of how the carpet actually came into existence would always remain the same in the absence of the documentary evidence. However, according to Enza Milanesi’ The Little Brown Guide to Carpets’ there are two theories to ponder upon. The first theory says that the carpets were invented to serve the practical purpose of the rough nomadic populations. They were thickly knotted to protect the

or before the introduction of the synthetic dyes (occurred during 1860-1870), are fondly termed as antique carpets. ‘Semi antique carpets’ are those that were woven from 1860-1870 to the early 20th century. Usually, Turkish and Persian weavings have fully or partially displayed traditional decorations and motifs. The carpets woven from 1920-1930 till today are known as ‘modern carpets’. Modern carpets are normally seen inspired from the Western choices and demands. However, there was this deprivation of qual- for more news click on http://cre ity and tradition. tepost.gr The above chronological classification of such ‘living objects’ as carpets is quite elementary. Fascinatingly, the ones that were woven before 17th century are so rare that they can only be seen in museums or large collections. The early-knotted forms were also seen as domestic usage articles such as wall hangings, matting, etc. that were progressively developed into exquisite forms of hand-woven art forms. The western weavers were influenced with the Oriental motifs, primarily Sassanian origin. However, there was a progressive enrichment by difficult blend of Asiatic, early Byzantine, Christian and Islamic cultures. 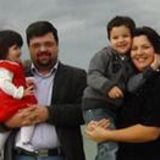